and then the next trick would be on the delegate method “didUpdateLocations“. You will have to use a timer and handle the Background Task appropriately. Any missing steps and the location will not be updated continuously.

But in the case of getting the location when the app is terminated/suspended, I can not use [myLocationManager startUpdatingLocation]; The only way to make it work is to use:-

Another important trick is, you will have to know how to handle the key “UIApplicationLaunchOptionsLocationKey” on the app delegate “didFinishLaunchingWithOptions“. Here is the sample code:-

In addition to the didFinishLaunchingWithOptions method, I have created a locationManager Instance when the app is active. Here are some code examples:

UIApplicationLaunchOptionsLocationKey is very important to get the location update even when the app is neither active nor in the background.

The method will only run again after you killed/terminated the app by swiping up from the App Preview Screen and then relaunch from where your app is located.

When your app delegate methods LaunchOptions contains the key UIApplicationLaunchOptionsLocationKey, it means that your app is launched by the iOS because there is a significant location changes. So, you will have to do something with the new location GPS coordinates return from the location manager.

If order to do so, you will have to create a new instance of location manager and you shall get the location coordinates from the method “didUpdateLocations“.

In this source code, I have included the methods to save the location GPS coordinates into a PList file. The purpose of saving into a PList is to record the location coordinates, the iOS Application States and the way locationManager is created (Add From Resume or otherwise). 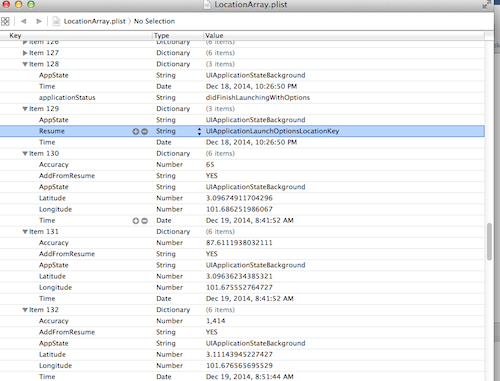 When you see the key “UIApplicationLaunchOptionsLocationKey” under “Resume“, it means that the iOS has relaunched the app after the devices has moving significantly from the last known location. If you create a new location Manager instance, you will get new location from delegate method “didUpdateLocations“.